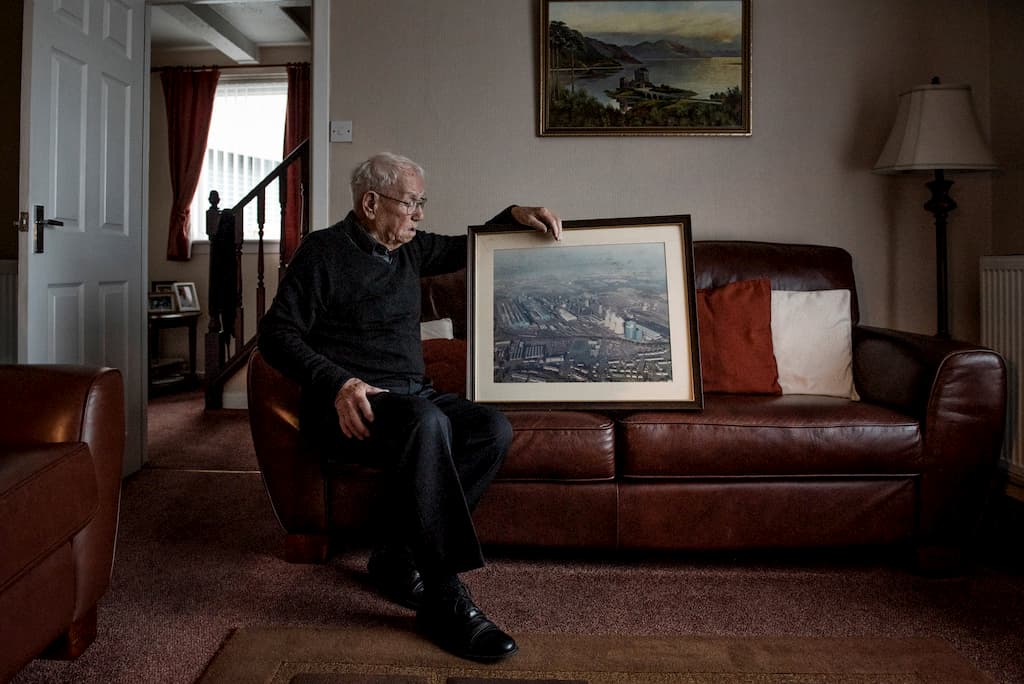 Part 6: In a wasteland on the edge of the Scottish town of Motherwell, our final stop, Tommy Brennan pointed out things that were no longer there.

In a wasteland on the edge of the Scottish town of Motherwell, our final stop, Tommy Brennan pointed out things that were no longer there.

There had stood the factory gates, he said, there the cooling towers. This was once one of Europe’s biggest steelworks, where Mr. Brennan first worked in 1943.

But now there was nothing but yellowing grass. Once bigger than Central Park, the Ravenscraig steelworks was shut and dismantled in 1992, after being privatized by London’s Conservative government. That put an estimated 10,000 residents out of work, including Mr. Brennan.

A gathering of campaigners for Scottish independence in Clydebank.

Tommy Brennan, a former steelworker in Motherwell, showing a photograph of the plant.

In Shirebrook, I saw how deindustrialization eventually contributed to Brexit. But in Motherwell it helped heighten resentment of the British state rather than of Europe: In 2016, this area voted to stay in the European Union, but in a Scottish independence referendum in 2014 it favored leaving the United Kingdom.

Mr. Brennan was among those voters — he had concluded that London would never prioritize Scottish interests. “If we’d been an independent nation when Ravenscraig closed,” he said, “it would never have closed.”

Yet alienation takes many forms, even in the same town. After talking with Mr. Brennan, I crossed Motherwell to meet a woman born the year after the steelworks closed.

With little permanent work in a post-steel Motherwell, Ashleigh Melia had spent her adult life in temporary jobs on the minimum wage. Now, in her work as a cleaner, employers sometimes send her away as soon as she arrives — there’s no work that day, and therefore no pay.

A view of Glasgow. Britain’s vote to leave the European Union was opposed by most Scottish voters.

As a full-time unpaid carer for his disabled brother-in-law, George McArthur of Clydebank depends on government benefits to make ends meet. Cuts to those benefits, enforced by the London government, contributed to his support for Scottish independence.

The Conservatives’ decision to shrink the British state in recent years, cutting welfare payments by about $40 billion, has also squeezed her family. Her 4-year-old daughter, half-blind and half-deaf, has been denied disability allowances worth up to $460 a month.

Fired from her latest job in October, Ms. Melia now struggles to pay bills, her four children joining the 600,000 British minors who have fallen into poverty under the Conservatives.

To cut electricity costs, she encourages them to play in the dark.

But unlike with Mr. Brennan, all of this has not led to political engagement. Rushing from job interviews to hospital appointments, and with no internet at home, she had no time to think about politics.

She couldn’t name most political parties. She had no opinion on Scottish independence.

It was a reminder of another reality — one in which many find it hard enough to live, without worrying how to vote.

Ms. Melia had never heard of it.