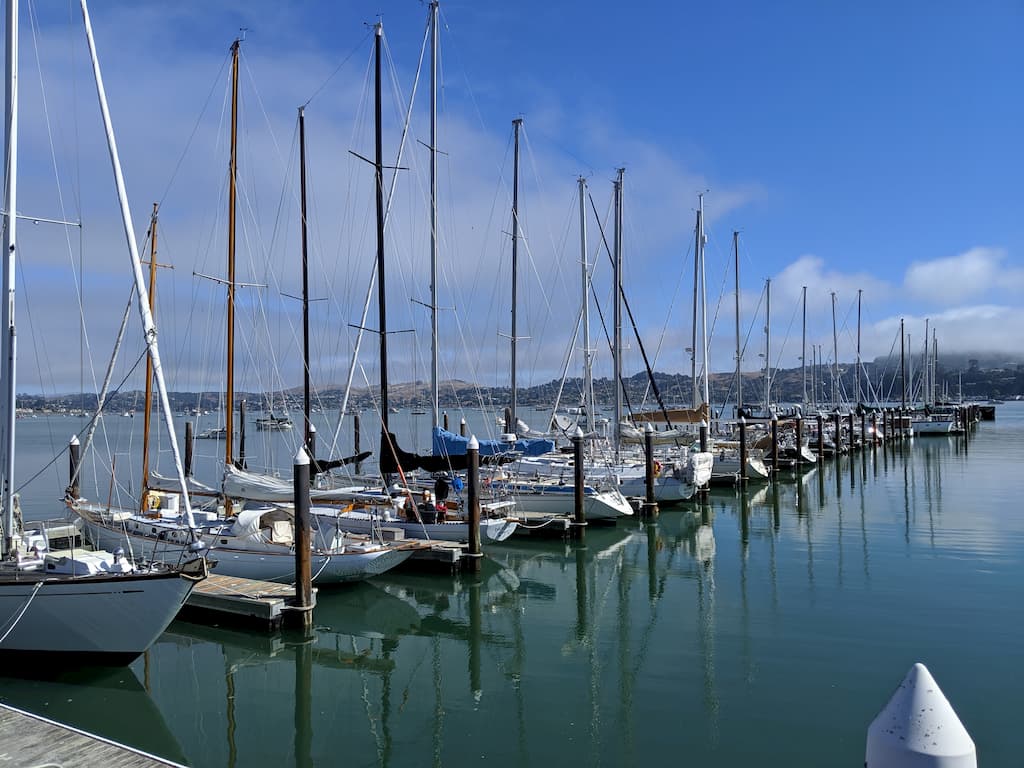 If avoiding humans is your social preference, then maybe a sunny August visit to Sausalito isn’t the right idea. Unless you know what you’re doing.

If avoiding humans is your social preference, then maybe a sunny August visit to Sausalito isn’t the right idea. Unless you know what you’re doing.

I’m doing my push-ups and planks in the early morning, asking Google stupid questions like, “Hey Google, do you know my name?” and think to ask, instead, “Hey Google, what’s the weather today in Sausalito?” I f I’m contemplating a visit, I look for a day where the temperatures are in the high 60s to low 70s. San Francisco may be fogged in, but Sausalito, north of the Golden Gate Bridge and hidden behind a ridge that protects it from the river of fog that streams in through the Golden Gate, can be nice and warm. Google confirmed my hopes, so I gobbled down breakfast and hit the road for the hour and a half drive up from Santa Clara.

Friday morning. A work day. Get to Sausalito by around 9:30 in the morning, and the tourists are still deciding between Rice Krispies and the pancake blowout. I’d have time to have the best spots to myself. Forget about weekends, of course. Every tourist from every corner of the globe is going to visit Sausalito on a summer weekend.

If I’m heading north, I’ll take Highway 280 over 101 under almost any condition. It’s a beautiful ride and I never tire of it, up near the spine of the Peninsula through rolling the rolling hills of Stanford and Woodside, into the marine influence that hits San Mateo near the junction with 92, and then up to San Francisco where the freeway peters out like a spent stream into the standing pool of 19th Avenue.

San Francisco was predictable to its summer days, socked in with fog all the way down to Daly City where it was so thick it drizzled beads of water on the windshield. The Golden Gate Bridge was performing its Chamber of Commerce routine, with the towers playing peek-a-boo with the fog even as I drove across it: now you see it, now you don’t. Once you cross the bridge, the weather breaks up, and as I head down Alexander Avenue, the sun was making its presence felt and the fog retreated to the periphery of any line of sight.

A weekday morning in Sausalito reminds me of early morning in Paris. You know the tourists will be flooding the area, but before 10 or 11, there’s an intimacy between the early riser and the city, watching it awake as businesses yawn their way open, walkways being brushed, and flowers blushing open. I know where to park where I don’t pay a cent, can stay as long as I want, and no I won’t tell you where. You just have to be willing to walk a bit to downtown, but even at that, it’s barely an effort.

A walk along Caledonia Street in the morning silence with few people about. You’re fairly close to downtown, but this is mostly the locals’ spot. Quiet, modest shops and groceries. A large civic theater under construction. It feels Americana, old school and 1950s.

Across Bridgeway, before you get to the main downtown tourist area, you find the harbor and the public waterfront. That was my early morning destination, and I walked along the wood planks around the perimeter of the marina, and through some of the docks. The air was cool and sunkissed, and I watched as Mt Tamalpais hid its peak in the fog before shyly revealing its beautiful self under spotless blue skies, all in the course of about 45 minutes. I took my time, utterly alone except for one or two men tending their yachts, and walked about the marina, visiting the Taj Mahal houseboat and leaning on the railing to look across Richardson Bay to the hills of the Tiburon peninsula. I’m always enchanted by that view. The summer-toasted hills remind me of something that I know but never seen. It feels Mediterranean, maybe Sicilean, but as I’ve seen neither, that’s only instinct. It looks to me beautiful, serene, and a little eerie. But that’s just me.

Standing out at the end of a pier into Richardson Bay, I could look north to Mt. Tamalpais, scan east toward Tiburon, and then sweep south toward San Francisco. Angel Island is prominent here, as it is when you visit Tiburon, and I watched the fog bank crash over it like an ocean breaker.

Heading back toward the Ferry terminal, I passed through a waterfront park, with a stone path and benches built into the seawall, with a grassy area behind it. I’m sure I’ve seen that before, but I never took the walk from the water side until this visit. A ferry was unloading its burden, and the tourist buses where now streaming in, filled to capacity. With humans.

It was time to head for the hills.

You look up from the scenic downtown areas where you have a pool table level view of San Francisco across the bay water and turn your gaze instead toward the house-tiled hills. I don’t know about you, but my instinct calls to follow the streets upward. I remembered while driving into town the hill starting at the Golden Gate Market near where Bridgeway curls up into Richardson so I forced myself to endure the bay and San Francisco views along the Bridgeway waterfront and then climbed up Richardson to Central, and up the narrow Central until I got to the base of Cable Roadway.

Stairs. I thought this was very cool about the hillside Sausalito neighborhood. It’s criss-crossed with stairs and walkways that split between properties, connecting short cuts between sections of the hill. The Cable Roadway steps looked promising: lots of them, dark, shaded and steep. About halfway up through the shaded, leaf-littered wood terraced steps, I thought I should be counting them. I got to 96 as I met the top of the stairs at Crescent Avenue, so the route is in the 200-step neighborhood. As I stood at the street sign to recover my breath, I figured to round up to make it an even one-thousand.

The streets are curvy and narrow as they climb and swoop their way about the hillside, and the homes are impressively perched with amazing views over the water, though most of these views are inaccessible from the roadside due to the foliage privacy walls blocking the sightlines. I wandered along the shady roads, following a random path that might eventually lead me back down to Bridgeway, looking enviously at the homes (one for sale at $4.5M), finding a redwood tree marked as having been planted by an 8-year old boy in 1929, and settling down for a rest on a wood bench on a small, brick-paved patio on a sunny corner overlooking the bay.

The bench would make for a great nap, I thought, as I sat in the sun, the heat amplified by the bricks. I could look out over the rooftops and between the homes at the bay below me, and my eyelids drooped between moments of awakening when neighborhood cars passed by. Most drivers never saw me watching them, and those that did would double-take a look at me, apparently surprised anyone was sitting there or maybe contemplating that the little brick cutout was actually a serviceable public park. There were no humans about, and I could let my mind dissolve and reform in various shapes, vaporized by the sun. My delight in an outing often comes down to something as simple as finding a bench like this.

It was time to head back, and drive home. Down the hill I walked, until discovering a final walkway and staircase, the one you pass on Bridgeway looking up, but this time understanding its passage coming down the hill, past a fountain, and back to familiar Tourist Land. I stopped at Firehouse Coffee and Tea, sat in a leather chair drinking my coffee, then waved goodbye to Sausalito until the next time.