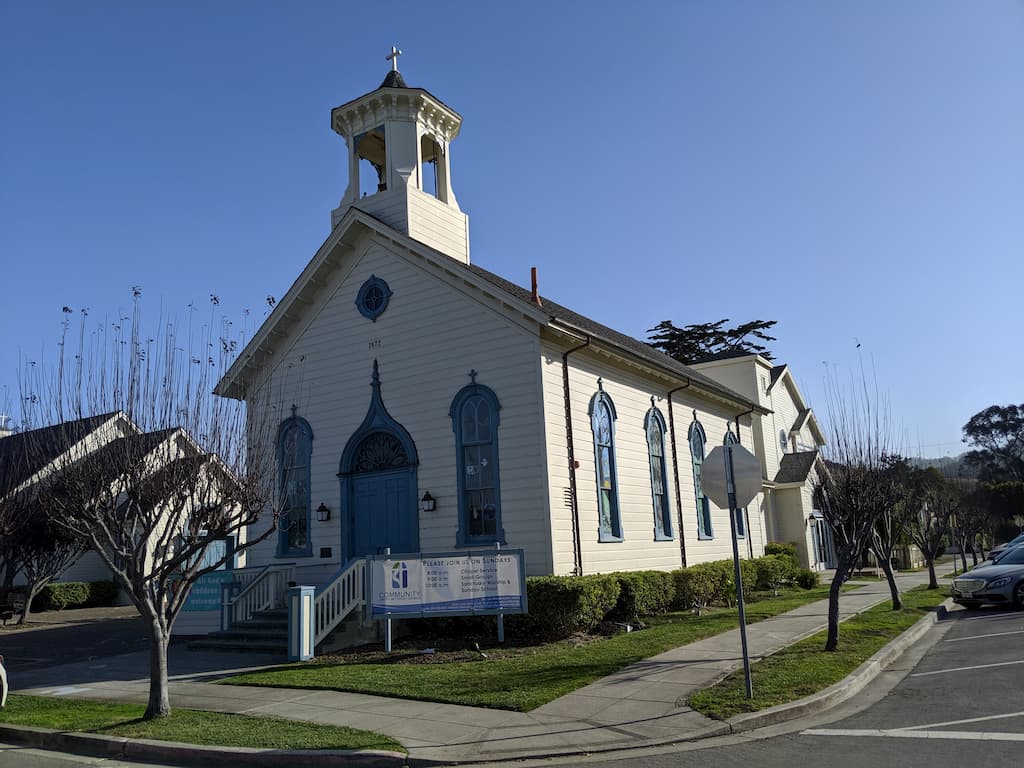 Painter has been pestering me to meet him at Half Moon Bay for a while now. "Come on, Bearman. You'll love Main Street. It's an old-style downtown like they don't do anymore. You don't even have to go see the beach. Plus, there's a diner. Coffee's on me."

Painter has been pestering me to meet him at Half Moon Bay for a while now. "Come on, Bearman. You'll love Main Street. It's an old-style downtown like they don't do anymore. You don't even have to go see the beach. Plus, there's a diner. Coffee's on me."

So I threw my laptop on the front seat and drove up 280 to 92-west on a Halloween morning. Painter usually feigns destitute, so an offer of coffee is worth the visit. I told him I'd meet him there.

Highway 92 off of 280, heading west to the coast runs through a valley carved into the north-south running hills. As you get toward the ocean, you're reminded why Half Moon Bay is the pumpkin capital of the world namely because there are oceans of orange orbs for sale in fields to the side of the road. It was Halloween day, so everything must go at $5 or less, "even the giant ones." I imagined the hogs and livestock salivating for November First leftovers.

Painter was waiting for me in front of the United Methodist Church, grinning. "Take a shot of this from across the street for your site." I did. It's a pretty little community church, with the coastal hills in the background. Half Moon Bay is elegant in its simplicity. The church shows off that style.

We took a walk around town, Painter pointing out notable homes and shops, a bright yellow Victorian, the Sacrilege Brewery - his favorite pub, the Moonside Bakery, and the bright pink Half Moon Bay Feed & Fuel Co. Main Street isn't very lengthy, so we walked the full distance to the bridge at the end of the street. It had a plaque: "First Concrete Bridge Erected, San Mateo County 1900." I looked at Painter. "You betcha!" he said.

We walked past the John L. Carter Memorial Park as we crossed the bridge on the other side of the street. "Mia and I watched a wedding down there last year," I said. The park was emerald green then, unlike the grey tones it's taken on as October leans into November. "Nice little creek runs through it," said Painter. "How about some coffee now?"

We walked past shops and galleries, arriving at the Mainstreet Grill which had a street presence that lacked only a few 1954 Chevys and scooters to betray the time warp. We both had bacon and eggs to justify our coffee. I grumbled about the toast that cracked in half.

"You can't tell the quality of a diner by bacon and eggs," said Painter. "You should have ordered something more involved."

"No, but it's a benchmark," I said. "If you can't nail the basics like toast that remembers when it was fresh bread, and bacon that yields like a maiden rather than fights to the death, then you're not going to entice me to try out the baked sweet stuff."

Painter slurped his coffee and said the décor and ambiance were lost on me. "They used to have a chef here who sang to the customers while he cooked." I nodded and said I'd consider that history as part of my overall evaluation. There were regulars at the bar. "That's a plus," I suggested to Painter.

He slid a quarter across the table for the coffee while I paid the rest of the bill and he escorted me back to my car. "If you rode a horse here, you could have tied up instead. It really feels like that here. Glad you came?"

I said yes and thanked him for the coffee. "Don't miss the Carnivorous Plants shop on the way back over 92!" I promised him I wouldn't.